It's been a week since the not on the high street.com Make Awards, and I have now been sent my shortlisted banner that I can add to my blog which I am super pleased about.


I have also been busy trying to organise some local publicity from the event. With the help from the multi-talented Sarah Ward from Fouracre PR, we got into the Business Pages of the Evening Telegraph (page 48 if you're local and want to check it out).

It's also been a busy week for sorting new products and developing old ones, I am off for a day at the print workshop in Leicester next week to do some screen printing on to fabric so will be updating you with those very soon I hope.

Enjoy the sunshine (while it lasts).

We have just arrived back from the not on the high street.com make awards which were held at the beautiful Syon Gardens in London. It was a really exciting day and a great opportunity to meet other partners with noths.com and also to meet the lovely faces behind noths.com (I was a little star struck by Holly Tucker and Sophie Cornish).

Both myself and my husband Tony are partners and were also both lucky enough to be shortlisted for prizes within different categories. My category was best store front and Tony's was for Best Product for his Solid Oak 'Hot Stuff' trivet: 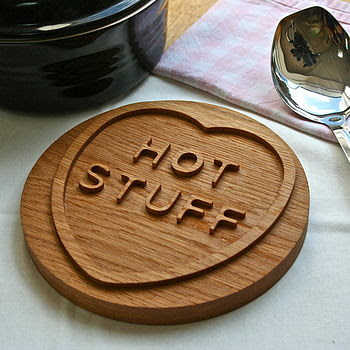 When we arrived in the main hall it was a real suprise to see that all of the shortlisterd partners had large photo's of one of their products displayed on easels on the tables around the room. First of all I could only see Tony's and thought they had maybe only included a few, but Tony hunted for mine and when we finally found it I felt incredibly proud :) 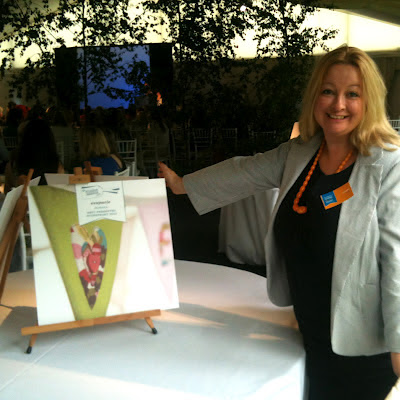 It was a really relaxed, but busy day filled with interactive workshops and seminars with help and advice on how to get the best from your creative business and how to take it forward and grow. But at the end was the really exciting part (the Awards).

There were two other partners in my category. Both with super storefronts and unfortunately I didn't win. I was a little disappointed to find out that I hadn't won, but the competition was fierce and I do feel excpetionally privileged to have made it to the top three. But there was no need to feel too despondent as my super talented husband won in his category!! Go Tony, well done, I am so pleased for you :) It was a really great day, thanks so much notonthehighstreet! 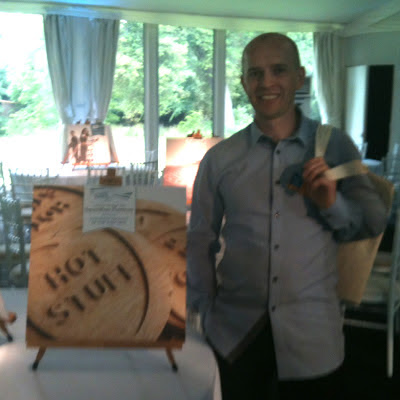 Followers of my blog will know that I don't always make things from fabric. I am also a Graphic Designer (indeed this is where it all started). So my day is usually split between sewing and drawing, which isn't a bad life at all.

But lately I have been doing some snooping about in blogland and have found some pretty gorgeous blogs and to be honest they put mine to shame! As I don't really have any excuse for a shoddy blog I set to work designing my page especially for me, which isn't the easiest thing in the world to do as I hate designing for myself. With my clients I ask for a clear brief for the initial concepts stage but when you are designing for yourself the goalposts are constantly shifting and I think I would have to be the worst client, my ideas and needs are constantly changing and I'm never satisfied!

I did get some inspiration from a client's blog that I designed a few weeks ago claireabellemakes and Claire recently contacted me again to design for her some additional social media buttons for her site:

I really like the greens and corally pink I have used and really wanted to use them on my own blog but in a different way. I have also designed a new blog button for evajeanie and a new shop button: 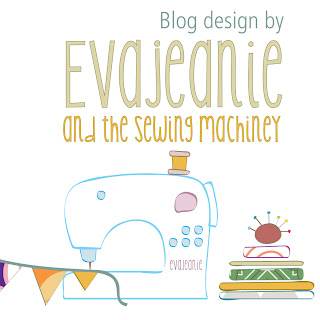 So it has take me a while to come up with and draw a concept that I was happy with, but here it it my finished design (which I am sure will morph into something completely different over the coming months, but this is the starting point). Hope you like the new look and I'd loved to heat what you think.

If you would like to have some designs made for you please message me, I can also do business cards, leaflets, posters etc.

I am very excited about the nothonthhighstreet Make Awards, this Wednesday. I have bought some new sandals to wear so I hope it doesn't rain too much!

A month or so ago I posted some icons that I had designed for a multifaith calendar I have been working on for 2013. The last post just showed the little icons and these were the starting point for the scheme. I thought you might like to see the calendar in it's entirety now it is finished: 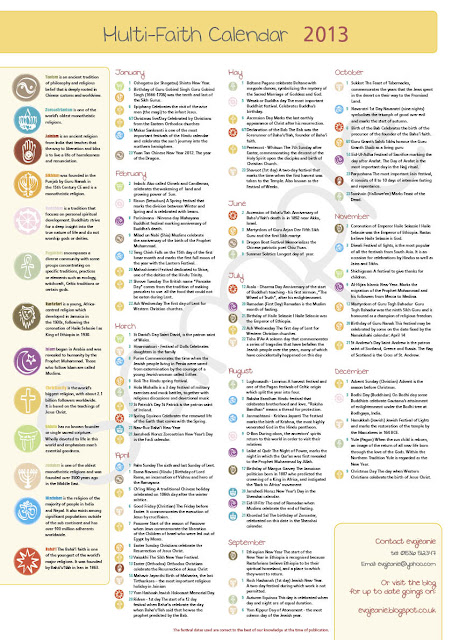 This artwork is a sample and dates on the version are intentionally incorrect, so I wouldn't use it as a reference point as it stands, but they are available to buy with the correct dates either as a hi-res pdf download or a printed A1 posted, they can also have your company logo in the bottom yellow panel. Email me for prices.
Posted by Unknown at 10:11 1 comment:

Exciting News!!! As many of you know evajeanie is a partner with notonthehighstreet, next Thursday they are hosting their Make Awards 2012 which celebrate creative enterprise.

Yesterday they announced their short list and guess what?! I made the shortlist!!!! Wahoo! My category is Best Store Front, I am so excited! I am so so so proud of myself for being shortlisted. You can see my store front here:

Wowsers it way too late for me to be blogging but I had to tell you about a new colourway I have added to my felt Love Heart keyrings before I go to bed and forget! 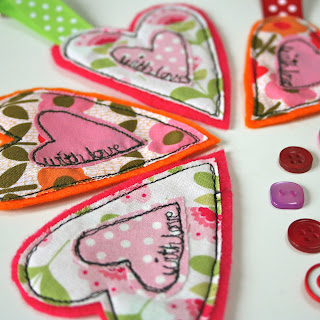 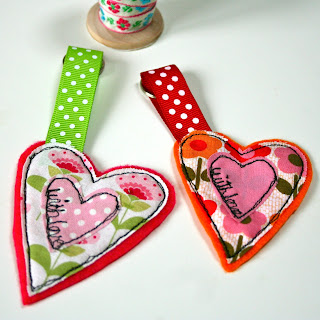 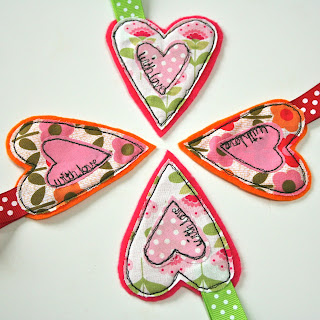 These supercute keyrings were a really popular product in the spring but back then they were only available in green and fuschia. So for Summer 2012 I have launched a new colourway, salmon pink with tangerine and olive, you can buy directly through me by emailing, or you can go to my online shop with nothonthehighstreet.

Goodnight peeps, I'm off to rest my poorly eyes now and indulge them with frozen tea bags, oh yes the glamour never ends!

It's been another busy week, with little time to blog, just lots of sewing and designing. But I have carved in a little time on this soggy Monday morning to just post about what a lovely weekend I had at Knaresborough bed race in North Yorkshire at the weekend.

For those who don't know, the bed race is a charity event that takes place every year in the sunny town of Knaresborough. It's a slightly wacky day and I will try to describe what happens, although it is a little surreal! Teams of six people, dress up a bed on wheels based on a theme that is given to them a few months in advance, the team of six plus friends and children also dress up. My Brother-in-Law was in a team this year and their bed's theme was Indonesia, their team name was St Johns Juggernauts! They decided to have a giant orangutan as the focal point of their bed and you can see from the photo's that it was an amazing design. The finished orangutan was huge and had a movable head and arms that would give Mr Tickle a run for his money!

Here's me doing a bit of speed sewing, to attach the head: 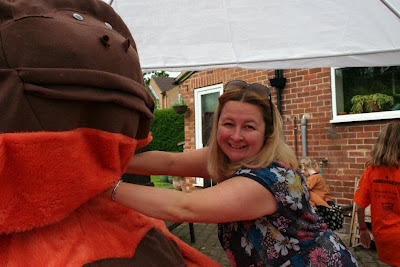 Once all of the emergency five minute jobs were done, the team wheeled the bed to Knaresborough Castle Gardens for the judging of the best dressed bed. 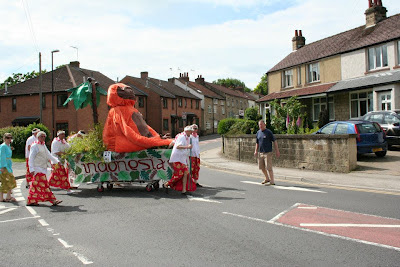 I have seen some amazing creations over the last few years, may favourite this year (apart from the giant orangutan) was the smurf bed. 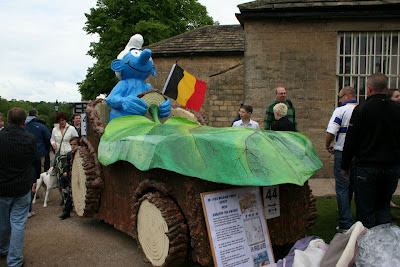 Once all of the judging has taken place the beds leave the gardens for a parade through Knaresborough town, the bed looked amazing making it's way down the High Street and got a very good reception from the crowds: 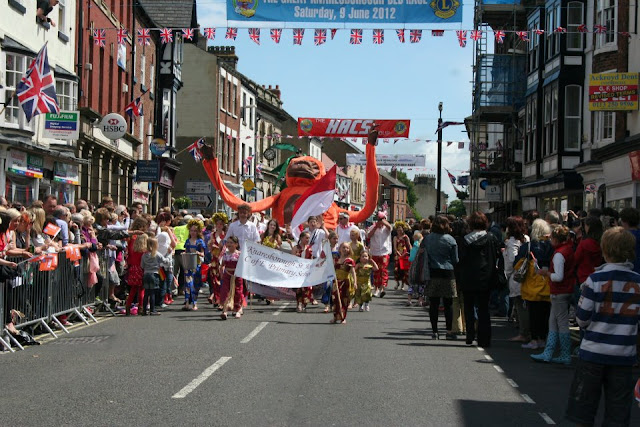 Once the parade is over the beds are stripped and the teams get into running gear for a race around the town, yes I told you it was a bit of a wacky day didn't I?! 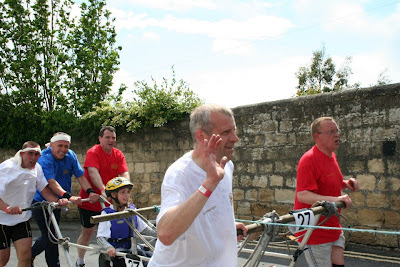 Knaresborough is a pretty hilly town and the race makes best use of this terrain, I struggled to push the buggy around much of it. Here's Conor's team just making it's way up one of the many hills!

And as if this wasn't enough the race finishes with a swim through the river (with bed and child in helmet), which is hard work on a nice sunny day but after all the rain we've had, this weekend's finale was more of an extreme sport, the river was flowing so rapidly the current tipped the bed, luckily everyone made it to the other side in one piece although I think it was a bit touch and go! I didn't get any photo's of the river part as I had made my way to the pub for a pint (it's hard work being a spectator).

Once the race is over it's time to go home, here's the bed that has been re-dressed making it's way to the pub to join us! 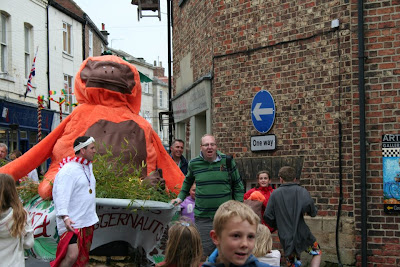 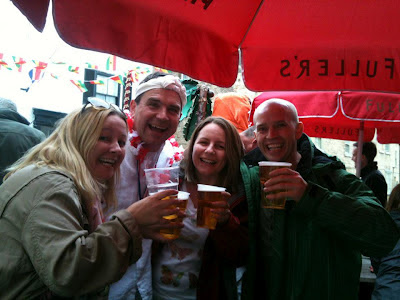 I think this was the 47th Bed Race and traditions like these are a sacred part of British culture and further validates the theory that us Brits go a bit bonkers when the sun comes out (or not). I should also add that all the money raised goes to charity and that St Johns Juggernauts raised over £4000!

It was a thoroughly brilliant day :)